Dwight Yoakam, presented by Latshaw Productions
Dwight Yoakam has sold more than 25 million albums worldwide, and he is a 21-time nominated, multiple GRAMMY Award winner. He has 12 gold albums and 9 platinum or multi-platinum albums, with five of those albums topping Billboard’s Country Albums chart and another 14 landing in the Top 10. Nearly 40 of Yoakam’s singles have charted on Billboard, with 14 peaking in the Top 10.

Yoakam’s self-curated SiriusXM channel, titled Dwight Yoakam and The Bakersfield Beat ‘Where Country Went Mod’, will launch in late April. The channel celebrates the Bakersfield sound and those whom it has inspired, including Buck Owens, Merle Haggard, Wynn Stewart, Tommy Collins, The Byrds, The Flying Burrito Brothers, Eagles, The Blasters, Lucinda Williams, and more. It encompasses all that is California country and country rock, in all of its various and varietal hybrid forms, from Ricky Nelson to Emmylou Harris and Linda Ronstadt. The channel includes artists from the movement in LA in the early to middle ‘80s that Yoakam broke out of and features bands as diverse as X, Lone Justice and Los Lobos. This movement was encapsulated on the series of albums titled A Town South of Bakersfield and has led variations over time to the current continuing country scene in LA, all of which Yoakam has dubbed as a segment for his channel entitled “That Town South of Bakersfield: From Cow Punks to Now Punks”.

In 2016, Yoakam released his bluegrass album Swimmin’ Pools, Movie Stars… on Sugar Hill Records. Featuring a band of bluegrass luminaries, this album boasts a collection of reinterpreted favorites from his catalogue, as well as a cover of Prince’s “Purple Rain”. Produced by nine-time GRAMMY winner Gary Paczosa (Alison Krauss, Dolly Parton), Jon Randall (songwriter of “Whiskey Lullaby”), and Yoakam himself, and mixed by Chris Lord-Alge, this album reflects the love for bluegrass music that Yoakam developed at an early age in Kentucky and that has inspired him for many years thereafter.

In addition to his musical career, Yoakam is a formidable film and television actor who has appeared in over 40 feature films, including Sling Blade and Panic Room. In 2016, he recurred in David E. Kelley’s Amazon series Goliath. Recently, he appeared in director Steven Soderbergh’s film Logan Lucky with Channing Tatum and Daniel Craig. Yoakam is capable of seamlessly melting into his roles and impressively standing toe-to-toe with some of the world’s top thespians over the course of his storied and successful acting career, including Jodie Foster, Tommy Lee Jones, Jared Leto, Forest Whitaker, and Matthew McConaughey. 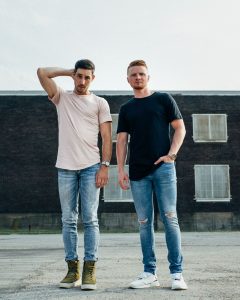 Nashville based pop-country duo, SixForty1 (Brooks Hoffman and Austin Gee) are bringing people together in a big way.  The duo originally formed when the two met at Murray State, in Kentucky. Since then, the goal of the band was to bring people together, through their music, as does highway 641, the band’s namesake.

Since making the move to Nashville in 2018, they have managed to create quite a buzz.  The two have a unique and inimitable songwriting chemistry and a knack for catchy and clever musical phrasing.

The band has yet to put out a full-length album, but from the two EPs and the handful of singles SixForty1 has released in just a short time, while also landing on major Spotify playlists like “Breakout Country”, “New Boots”, “Next from Nashville” and “Wild Country”.