Brief History of the Kilgen Organ 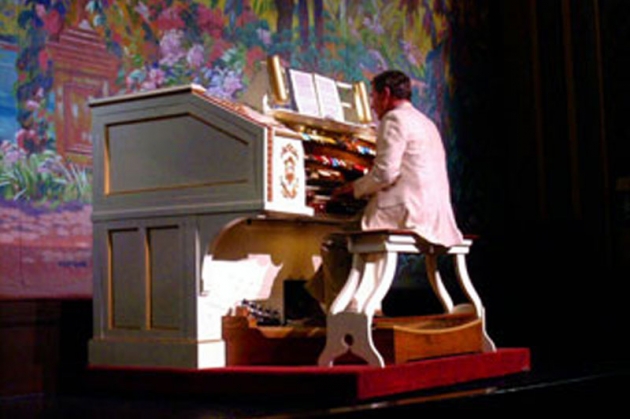 On the opening night in 1926, patrons of the Palace Theatre were treated to the sounds of the Kilgen Wonder Organ at the hands of the famous Banks Kennedy. Mr. Kennedy signed the wall of the left pipe chamber and wrote that “Valencia” was the first piece heard by the public. His signature has been preserved and remains there today. While the Kilgen was one of seven pipe organs in Canton, it is the only one that still exists and is by far the most well-known. Built by George Kilgen & Sons, Inc. of St. Louis, Missouri, it served as one of their show instruments in the Canton area and was pictured in their national sales literature.

The Kilgen Company was primarily a church and concert organ builder, their most famous instrument residing in St Patrick’s Cathedral in New York City. During the 1920s, though, Kilgen joined other companies such as Wurlitzer, Morton, Kimball and Moller in constructing instruments specifically designed for accompanying silent movies and entertaining theatre audiences. Out of several hundred such organs, the Canton Kilgen is the only one remaining in its original home.

The Palace Kilgen was always a crowdpleaser, and the Ink family, builders and owners of the Palace, liked to have it played. They and the management kept the organ in reasonably regular use through WWII and into the 1950s. In the early 60s, enough problems developed with the organ to render it unplayable. In 1967, Mr. Stephen Brown of Orrville, Ohio made some repairs to the organ and played it regularly until the theatre closed in the mid 1970s. While the theatre was closed, the roof developed many sever leaks and caused extensive water damage to the building and the organ. A group of rescuers (Charles Kegg, Clark Wilson, Charles Blair and Robert Beck) patched and repaired the organ enough that it would play again for the reopening of the theatre in 1980.

In this condition, the organ was used until 1992, when the Kegg Organ Company removed the entire organ from the building for an eight-month restoration effort. No screw was left unturned, and all perishable materials were replaced. Water damaged parts were repaired or replaced. The console was stripped, redecorated, repainted and refitted with all new controls. Two new ranks (sets) of pipes were added to bring the rank count to 11, with a total of 767 pipes.

A theatre pipe organ is very different in concept and mechanical design from a church or concert organ. The 11 ranks of pipes include many sounds never heard in a church, such as a kinura, saxophone and post horn. Also, in the Palace organ, are a marimba, harp, celesta, xylophone, orchestra bells and chimes, in addition to a complete drum and trap set for percussion effects. All these instruments were placed in the organ chambers and are struck with air-operated mallets when the organist plays these stops. The organ chambers are approximately 12′ wide, 10′ deep and 15′ high, and are located behind the false box seats on either side of the proscenium arch. From these perches, all the thousands of pieces await instructions from the able fingers of the organist, ready to speak freely to all parts of the auditorium.

Restoration of the Kilgen Theatre Pipe Organ was made possible by a grant from The Flowers Foundation. The restoration work was performed by The Kegg Pipe Organ Builders.